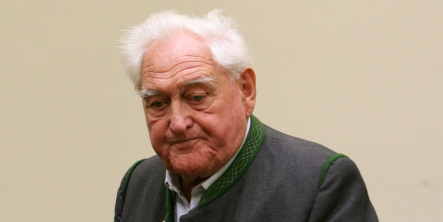 Josef Scheungraber, then the commander of a German mountain infantry battalion, is accused of ordering the killing of 14 civilians in the Tuscan village of Falzano on June 26, 1944. The massacre was allegedly in retaliation for an attack by Italian partisans that left two German soldiers dead. More than six decades on, the trial in the southern city of Munich comes at the end of a prolonged legal odyssey that has provoked outrage among Nazi victims’ groups.

Documents found in the 1990s pointed to Scheungraber’s alleged involvement in the killings and he was sentenced in absentia in September 2006 to life imprisonment by the Italian military tribunal in La Spezia. However Germany as a rule does not extradite its citizens without their consent and has not received a formal request from Italy to jail him here.

The Munich daily Sueddeutsche Zeitung said Monday that Scheungraber’s prosecution in Germany “is possibly – and even probably – the last major trial for crimes committed under the Nazis”.

A handful of protesters gathered outside the courtroom holding a placard reading “Mass Murderer Here! Give the Murdered a Name.”

The defendant, dressed in a traditional Bavarian suit with his thick white hair brushed back from his face, appeared to be in good health and alert as he walked with a cane to his seat in the courtroom. Scheungraber faces 14 counts of murder and one of attempted murder. He followed the proceedings with headphones due to his poor hearing.

The accused “completely and thoroughly denies the accusations in the charge sheet,” said a statement read in court by one of his two lawyers, Christian Stuenkel. At the start of proceedings, the prosecution’s opening arguments painted a chilling picture of that summer’s day in the tiny Italian farming community.

The German troops are alleged to have first shot dead a 74-year-old woman and three men in the street before cramming 11 others into the ground floor of a farmhouse which they then blew up. A 15-year-old boy, Gino Massetti, survived seriously injured and – more than six decades later – testified during the Italian trial. Massetti, now 79, has told the German press he has no desire to exact vengeance.

“I just want to forget those horrible moments,” he said.

Scheungraber has lived for decades as a free man in Ottobrunn outside Munich, where he has served on the town council and run a furniture shop. He regularly attended marches with fellow wartime veterans and recently received an award for municipal service.

A lawyer for Italian relatives of the victims, who are co-plaintiffs in the trial, said her clients wanted Scheungraber to finally take responsibility for the killings. “They have waited 64 years for someone to atone for their loved ones’ deaths,” she told the court.

The defendant said in his statement that he had not given an order for the killings and was not at the scene of the crime. His defence team said prosecutors had no witness who could testify to Scheungraber’s involvement. Scheungraber was not jailed pending his trial as prosecutors said there was little risk he would flee the country. Due to his age, he will only be asked to sit in court for a few hours at a time.

The military tribunal at La Spezia has tried several former Nazis for crimes committed in Italy during World War II but none of the defendants have been brought to justice.

In 2005 it handed life sentences to 10 elderly former SS soldiers for the massacre of 560 Italian civilians including 120 children in 1944 in the Tuscan town of Sant’Anna di Stazzema. At least two of the Germans have died since then. Another two were handed life imprisonment in September 2006 for the Falzano massacre and 10 others in January 2007 for a bloodbath in Marzabotto that left 955 dead.