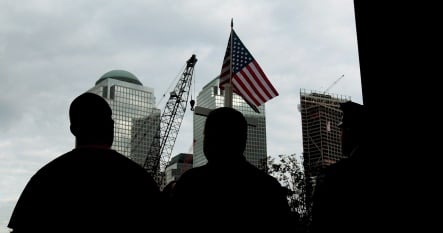 Mourners wait before a memorial ceremony on Thursday. Photo: DPA

The poll of 17 countries found that apart from in the United States, there was no real global consensus as to who was responsible for the infamous attacks that left 3,000 dead in New York and Washington DC. An average of 46 percent said that al Qaida was behind the attacks, 15 percent said the US had been responsible, 7 percent cited Israel, and another 7 percent cited another actor.

But the results of the poll in Germany stand out because they reveal that the concentration of conspiracy theorists is significantly higher than not only average opinion, but above that of the rest of the world – except for Turkey, Mexico and the Palestinian territories, where popular opinion tends to be anti-Americanism.

Out of all the countries polled, Turkey and Mexico had the largest number of people who believed the US had attacked itself, at 36 and 30 percent respectively. The Palestinian Authority came in third at 27 percent.

Countries in the Middle East tended to cite perpetrators that were not al Qaida, but according to the poll, Germany “remarkably” exceeded numbers in favour of blaming the United States in both Jordan and Egypt. But even in other European countries, many are not sure they believe al Qaida to be responsible – more than 20 percent of Britons, French and Italians said they didn’t know who was behind the attacks.

Meanwhile the African countries were the only areas with “overwhelming majorities” who said they believed the Islamist terrorist group was indeed behind the assault on the World Trade Center.

The poll, conducted by WorldPublicOpinion.org and the Program on International Policy Attitudes at the University of Maryland, was conducted this summer with a margin of error ranging from +/-3 to 4 percent. Some 16,000 people answered poll questions in China, Indonesia, Nigeria, Russia, Egypt, France, Germany, Great Britain, Italy, Jordan, Kenya, Mexico, the Palestinian Territories, South Korea, Taiwan, Turkey, and the Ukraine.