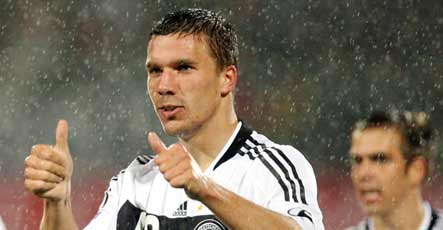 The 23-year-old Bayern Munich forward scored twice in Saturday’s 6-0 rout of minnows Liechtenstein in their opening qualifier on the road to South Africa and hopes to add to the 30 goals he has scored for his country.

“I feel very confident right now, hopefully I can continue my scoring streak for a while. I’ll try my best against Finland,” said Podolski ahead of Wednesday night’s clash at Helsinki’s Olympic Stadium. But defender Philipp Lahm warned that Germany faces a much tougher opponent in Finland and will need to exploit Podolski’s current form to leave Helsinki with three points.

“We have to keep providing our strikers with plenty of possession in the penalty area, Lukas has already shown how dangerous he can be if he has the ball on his left foot,” said Bayern defender Lahm, who will win his 50th cap. “Finland play a different brand of football from Liechtenstein. “Their team is good in defence and tactically very strong, our defence will be tested much more thoroughly. The Fins will come at us with plenty of aggression. If we keep our passing tight and controlled, we will create our chances,” he said. “We have already shown we can dominate defence-minded teams.”

Germany have a strong record against Finland – they have won 15 of the 20 matches between the two countries and their only defeat came in 1923. But under English head coach Stuart Baxter, Finland can take heart from their scoreless draw with Germany in Gelsenkirchen in 2001, the last time the sides met, and the home side have nothing to lose.

Finland are without two key midfielders – Jari Lirmanen is injured while Alexei Eremenko Jr was not selected due to a drink-driving conviction. But Baxter has a very experienced side who are looking to upset Germany in their opening World Cup qualifier.

“We have a strong team,” he said. “We believe in our skills and in our dreams.”

As a former coach of the South African football team, Baxter would love to take Finland to the next World Cup, but faces an uphill task in Group 4 which his side shares with Germany, Russia and Wales. “We were drawn into a tricky group. Germany and Russia are top teams and in addition the Welsh are quite capable of suprising people, especially against top-class teams,” said Baxter, a former England Under-19 coach. “We have a lot of work ahead of us, that starts in the Olympic Stadium against Germany.”

Baxter has plenty of experience with Liverpool veteran Sami Hyypia and ex-Ajax forward Jari Litmanen alongside Hanover striker Mikael Forssell and Werder Bremen defender Petri Pasanen who ply their trade in Germany. “There are young players in the squad, who have just broken through and they will get their chance, but at the moment we need experience from the likes of Hyypia and Litmanen,” said Baxter.

After failing to help South Africa qualify for the 2006 World Cup in Germany, Baxter succeeded compatriot Roy Hodgson as Finland coach in January 2008 and the 55-year-old says he is impressed with what he has seen.

“We have a good crew and there is a lot of optimism, my task is to maintain that,” he said. “It is an exciting challenge, I believe in a positive result.”