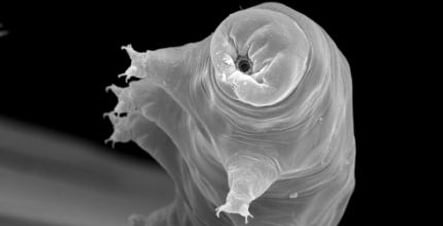 “It was astounding and breathtaking,” project leader, zoologist Dr. Ralph O. Schill, told The Local of the moment he and his team discovered that their tardigrades, also known as water bears, had survived the trip. Only bacteria and lichen have survived such a journey in previous experiments.

Two types of the 1-millimetre long creatures were launched 270-kilometres into space for the “FOTON-M3 Mission” in September 2007. Schill and his colleagues published their findings in the latest edition of the science publication Current Biology.

Schill has studied the wee eight-legged “survival artists” for some 5 years, and chose them for the experiment because of their hardiness. They live in water and can survive extreme temperatures, radiation, lack of water – and now cosmic conditions in the experiment conducted by Schill and his Swedish colleague Dr. Ingemar Jönsson for Universität Stuttgart. Water bears survive the bad times by going into an state called “cryptobiosis,” where organisms respond to harsh conditions by suspending all metabolic functions until a hospitable environment returns.

And that’s exactly what happened as they were exposed to the vacuum of outer space and cosmic radiation in the BIOPAN-6 Module during the European Space Agency (ESA) mission.

“Knowing the different conditions these animals can survive made me hope they would make it. But I could hardly have expected this result – you can’t simulate some of the space conditions in the lab,” Schill said, describing how he and his team excitedly jostled for a first look into the microscope after they had rehydrated the specimens.

The results of the water bear “space walk” will help scientists learn more about how organisms protect and repair their cells, Schill said, adding that they could use the research on the water bear’s cryptobiotic state to develop ways to preserve cells and entire organisms.

“We are really far from this now, but such a thing as just-add-water blood for blood banks is conceivable,” he said.

Water bears belong to the Ecdysozoa group of animals, which includes insects and crustaceans. They are found around the world and often live in moss.