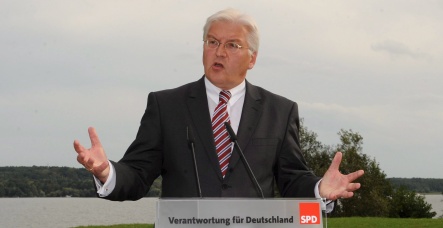 Steinmeier was nominated in a meeting on Sunday of his SPD to take on Chancellor Angela Merkel for the top job next September. Merkel, 54, is from the conservative Christian Democrats (CDU). The two parties have been in an uneasy “grand coalition” since an inconclusive general election in 2005.

What Steinmeier’s new position will mean in terms of policy for the 12 months that the present coalition has to run remains to be seen, with many fearing a state of gridlock will take over, just as the economy slows. Merkel though rejected any such talk on Monday, telling reporters – after first congratulating Steinmeier on his nomination – that the work of her coalition would not be compromised.

Born in 1956 in a small town in Lower Saxony in the old West Germany, Steinmeier served as chief of staff in former SPD chancellor Gerhard Schröder’s government before becoming foreign minister in 2005.

Steinmeier has never run for elected office, however, and many wonder if he has the killer instincts needed for the rough-and-tumble of party politics. For one thing, the silver-haired Steinmeier, 52, will be flying the flag for a party that is one of Europe’s oldest social democratic movements but is

Its poll ratings have slumped as the party has torn itself apart after the Schröder government’s far-reaching “Agenda 2010” reforms left many voters feeling the party had forgotten its social democratic roots.

Measures like the cutting of unemployment benefits have pushed swathes of traditional SPD voters into the arms of Die Linke or The Left, a hard-line socialist party formed only just over a year ago by communists from the old East Germany and SPD defectors.

What the bespectacled Steimeier hopes will help in his Herculean task is the other big result of Sunday’s lakeside get-together: the decision of the unpopular party chairman Kurt Beck to throw in the towel after two tough years in charge which was branded a “coup” in the German press.

Beck, vice-president of the Socialist International whose attempts to accommodate the SPD’s left wing is blamed for the party’s slump in the polls, is set to be replaced by the party’s last-but-one chairman Franz Müntefering – Schröder’s former right-hand man.

The choice of Müntefering and Steinmeier — dubbed the “founding fathers of Agenda 2010” by the Bild daily – represents a move to the centre, observers said, but they will have their work cut out winning back the party faithful.

The new duo is a “radical change that none of us expected,” said Klaus Schubert from the Münster Institute of Political Science. “Müntefering must bring back party unity,” Schubert told AFP. “But it will be difficult.”

Editorials in the German press on Monday expressed similar concerns, with the left-leaning Tageszeiting predicting gloomily that Steinmeier would be “the perfect loser” in 2009.

“A new start for the SPD? Not really,” agreed the centre-left Frankfurter Rundschau. “The party has a candidate who will not become chancellor and an old and familiar party leader. Where does that lead? Into opposition.”

But Bild, Germany’s top selling paper, was more upbeat: “Müntefering is the boss that this shapeless people’s party now needs. In him burns the fire that the frustrated members will at last be able to warm themselves with.”