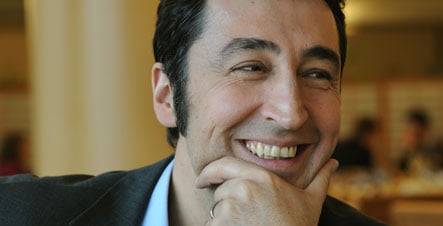 Cem Özdemir, 42, appeared poised to become one of the opposition Greens co-leaders after his rival for the post, Volker Ratzmann, withdrew his candidacy because he is expecting a child, the party said in a statement on Thursday.

“Ratzmann called on all those who backed him to grant all the support and goodwill and political power that we have to him (Özdemir),” it said.

Özdemir is the telegenic son of Turkish immigrants who came to Germany as part of a “guest worker” programme in the 1970s. The country is now home to about 2.5 million people of Turkish origin.

He belongs to the reformist wing of the Greens grouping pragmatic, pro-business members and would replace current party co-leader Reinhard Bütikofer, who is no longer standing for the job.

The reformists traditionally lead the party in tandem with a representative of the die-hard wing of ecologists and pacifists, represented by co-leader Claudia Roth.

The new leadership is to be voted in at a party congress November 14.

Özdemir is from the Swabia region of southwestern Germany. He became the first politician of Turkish origin to be elected to the country’s parliament in 1994, after becoming a German citizen two years before.

He was elected a member of the European Parliament in 2004 and has been a constant thorn in the side for successive Turkish governments for his outspoken criticism of the country’s human rights record.

The Green party arose out of the anti-war, environmentalist movement that swept Germany in the 1970s. It is a governing party in a number of German states and cities and was junior partner of the Social Democrats in the federal ruling coalition under chancellor Gerhard Schröder, from 1998 to 2005.

Its most prominent member is former Foreign Minister Joschka Fischer, who resigned from parliament after the 2005 general election to pursue writing and lecturing.