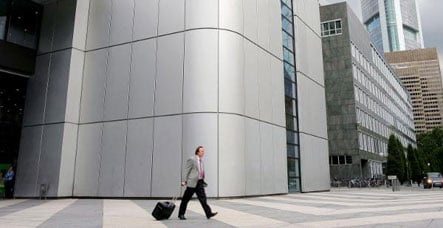 Dresdner HQ: Will the last one leaving the bank turn off the light? Photo: DPA

Investors pushed the share price down 8.93 percent to €18.295 on the Frankfurt stock exchange, where the DAX index of leading shares was 0.29 percent lower overall.

Political leaders welcomed a domestic tie-up that reinforces Commerzbank as number two behind Deutsche Bank but analysts said the €9.8-billion (€13.4-billion) cash and share operation was a better deal for Dresdner’s parent group, the insurance giant Allianz. Its shares were flat at €114.08.

Government spokesman Ulrich Wilhelm told a Berlin press conference the takeover offered the “perspective of a German banking market consolidation that is in the economy’s interest.”

He rejected reports the government had weighed against another bidder, state-owned China Development Bank, calling them “inexact and false.”

Commerzbank will take over Dresdner in two stages by the end of 2009 and eliminate 9,000 jobs, including 6,500 in Germany, as it does so. Commerzbank chairman Martin Blessing retains his post while Dresdner boss Herbert Walter would join the bank’s board.

assets – just over €1 trillion compared to nearly €2 trillion – and have Allianz as a major shareholder, with a stake of around 30 percent.

Sal Oppenheim analyst Carsten Werle told AFP: “We think the price is high for Dresdner Bank” but added: “I think for Allianz it was a good deal.”

Commerbank will pay for Dresdner with its own shares plus some €2.5 billion

in cash, of which €975 million would initially be placed in a trust to offset potential losses, in particular at the investment bank unit Dresdner Kleinwort, which is likely to disappear eventually.

That business has weighed on Allianz’s results since the insurer bought Dresdner seven years ago for 24 billion euros and was hit especially hard by the US subprime home loan debacle and subsequent international banking crisis. Werle found it “a bit surprising that there is no major risk shelter from Allianz’ side.”

He had also expected that more than 2,500 of the total job cuts would take place abroad. “I would say the split is perhaps a bit of a surprise.”

Investment banking activities in London and Frankfurt, along with back-office operations, will bear the brunt of the job cuts, but Dresdner’s Walter told a press conference there would be “no outright firings before 2011.”

Merck Finck analyst Konrad Becker told AFP he thought the 2,500 jobs slated to be shed abroad would probably come at Dresdner’s London operatons and “will be done very fast.”

Commerzbank expects savings of around €5 billion, mainly by 2011, from the deal, but is to book around two billion euros in restructuring costs next year.

The bank planned to reduce the total number of branches from 1,540 to around 1,200 and employ 67,000 workers. It also expected to have more than 11 million private clients and 100,000 corporate customers.

Analysts at brokerage Raymond James said “the transaction appears globally positive” for Allianz, which will continue to offer insurance coverage through bank branches, its reason for buying Dresdner Bank in the first place.

Both Werle and Becker felt the impact on the German banking sector, which is comprised of publicly-owned savings banks, cooperative banks and private banks, would be fairly limited. The position of the first two “is not challenged by this merger,” Becker said.

The 136-year-old Dresdner Bank, however, appeared to be nearing its end. “We want one brand,” Commerzbank financial director Eric Strutz told reporters. “We have decided it will be Commerzbank.”