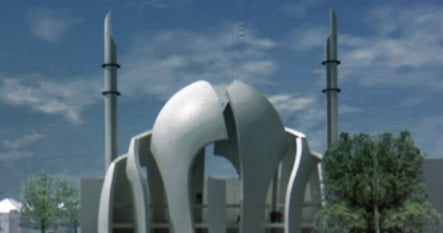 A video projection of the proposed mosque in Cologne. Photo: DPA

The Turkish-Islamic Union for Religious Affairs (DITIB)’s original plans for two 55-metre (180-feet) minarets were rejected but on Thursday night the more modest plans were approved by the western city’s council.

Plans for the mosque in Cologne, whose massive Gothic cathedral dominates the skyline and where 12 percent of the population are Muslims, have been on the cards for more than a year.

There are now 159 mosques in Germany, compared to just three in 1990, to serve a Muslim minority that numbers close to 3.5 million, most of them Turkish of origin.