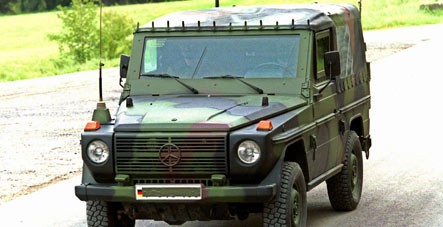 The older all-terrain “Wolf” model vehicle with light armoring was sent flying by a Taliban bomb on Wednesday, killing one soldier and injuring three near Kunduz in northern Afghanistan. With protection against gunfire, but not explosives, the Wolf was not suited for such a dangerous mission, the paper said, alleging that the soldier would have survived the attack in a properly armored vehicle.

The Bundeswehr uses about 260 Wolf vehicles, 80 of which have the same light armor that was on the vehicle destroyed this week. More modern vehicles, like the 8.8 tonne mine-armored “Dingo,” are too unwieldy for the steep climbs and narrow passages of Afhanistan.

Germany has some 3,500 troops stationed in northern Afghanistan with the NATO-led International Security Assistance Force (ISAF).

Experts estimate that some 3,000 people have been killed in the country so far. Three weeks ago the Taliban claimed responsibility for an attack that severely injured three other German soldiers. German troops also killed their first Afghan in an alleged insurgent attack last week.

Parliament is set to vote in October on whether the country will renew its Afghanistan policy. Any military action undertaken by the country is deeply unpopular with voters, and Germany has been under increasing international pressure to commit more troops to Afghanistan.