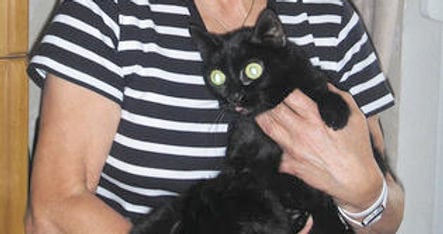 The gaunt Persian-mix was recently pulled from underneath the tub by plumbers after the neighbour heard crying and scratching during her morning shower.

It wasn’t until her husband was called to investigate that the source of the noises was identified. But then the couple immediately thought of Bonny.

The cat’s disappearance was well-known in the building. After a burst pipe caused water damage in several flats, Bonny’s owner Monika Hoppert and her neighbors left their doors open to help air out the building. Bonny apparently escaped and hid in the neighbor’s bathroom, where plumbers tiled her in while making repairs.

After determining the source of the scratches, the neighbors called Hoppert over. She easily recognized the meow. Workers were summoned and retrieved a near-lifeless Bonny.

“I took her straight to the veterinarian. He wanted to put her to sleep right then,” Hoppert told TheLocal. “I haven’t been back since.”

Hoppert hand-nursed her half-comatose cat back to life, using a syringe to feed and provide water to Bonny.

“It’s a miracle. She’s almost back to her normal self now,” Hoppert said.

A local veterinary specialist suspects some water had pooled beneath the tub, offering a tiny bit of sustenance to the fearful feline.

It’s “sensational that the cat lived so long,” Ingo Nolte, a professor at the Hannover Veterinary School, was told local daily Schaumburger Nachrichten. Nolte said the cat may have set a survival record.

The cat’s seven weeks behind a tub may have cost it more than a few lives, but it has earned the obligatory 15 minutes of fame.

“The phone started ringing at 6:30 this morning with television teams,” Hoppert said.