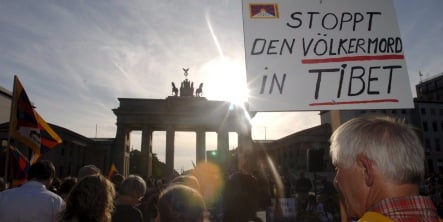 Until now, protesters have been simply arrested, questioned and then deported, but the authorities have stepped up their response to include ten days in prison

The German foreign office confirmed on Friday that Florian Norbu Gyana Tshang, 30, a German of Tibetan origin, was arrested in front of the Olympic zone along with several others, German daily Tagesspiegel reports.

The organisation “Students for a Free Tibet” has undertaken eight protests over the last few days.

The family of Tshang, a computer software developer, have told reporters from the dpa news agency that they have been told he will be kept in prison until the end of the month. His sister Yuldon Gyana Tshang said, “We are worried about him but we are also proud of him.”

Tshang was arrested with three other foreign activists, reportedly from the USA and the UK, after they unfurled a Tibetan flag. Two press photographers were temporarily held at the same time.

“Norbu’s case puts the suffering of the Tibetans in Tibet on the agenda, making sure it is not forgotten, and calling for serious steps to finally be made on the side of the Chinese government, to peacefully end the brutal oppression of the Tibetan people which has been going on for nearly 60 years.”

A day previously, six US citizens were arrested for “disrupting public order”, which a “Students for a Free Tibet” spokesman said was taking video.