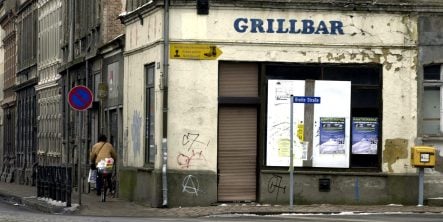 Anklam has one of Germany's highest rates of unemployment. Photo: DPA

The study, “Europe’s Demographic Future,” calls the economically depressed eastern German states “crisis regions,” and ranked them lower than countries like Slovenia and the Czech Republic in demographic stability and prospects for the future.

“Germany as a whole averages right in the middle,” institute director and study co-author Rainer Klingholtz told The Local on Friday. “But the study was conducted regionally, and these regions have the biggest demographic problems in the European Union, not just in Germany.”

Germany is the most starkly divided country in the study, Klingholtz said. Southern German states like Bavaria are among the most economically and demographically successful regions in the study, but former East German states like Saxony-Anhalt are suffering from severe population stagnation. Low birth rates, a high elderly population, and job shortages are all major factors in these depressed regions.

“Germany continues to bear the marks of the old border demarcating the east-west political systems,” the study states. “The boundary separates Germany’s needy east from its more prosperous west […] Despite the massive subsidies that have been pumped into Germany’s new eastern states, they have not yet been able to close the gap on the west.”

Since the Wall fell, some 1.7 million Germans have left their eastern homes – up to a million of them almost immediately, which caused an unprecedented void, Klingholtz told The Local.

“Most of them were young, and more women than men left too,” he said. “Which is a problem when it comes to creating future generations.” The drastic change means that eastern German regions are less likely to stabilize after the change to a market economy than countries like Hungary and Slovenia, where the population has emigrated much more slowly.

Add plunging birthrates – which Klingholtz says have gone down by half since before the Berlin Wall fell – and the problem is too big to solve. Not even this week’s announcement by the German Statistical Office that birthrates in 2007 were the highest since 2000 can turn back tide of population stagnation, he said.

“It is, without a doubt, too late.” Klingholtz said. “But it’s a good sign for government family policies.”

Iceland is the study’s prime example of how this strategy can be employed successfully, along with Sweden and Norway, he said.

The demographic development study included 285 regions in 27 EU countries and the non-EU countries of Iceland, Norway and Switzerland. Iceland was named as the healthiest country, and Romania ranked last in the study, which predicts that massive demographic imbalances will continue to change the face of Europe in the next 40 years as native populations stagnate and immigrant populations grow.