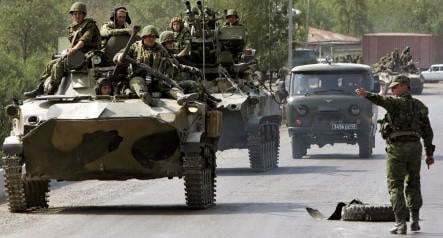 “We are anticipating and we are looking forward to the full withdrawal of Russian troops from Georgia-proper will take place during the course of today (Friday),” government spokesman Thomas Steg said.

“But this morning … it was not possible to say with certainty that a substantial pullout was taking place. We must wait and see what happens in the coming hours,” Steg told a news conference.

He said a security cordon inside Georgia where 500 Russian soldier are set to remain must be “temporary.”

“We attach a lot of importance on the fact that such a settlement can only be temporary,” Steg said. “There can be no permanent buffer zone occupied by Russian peacekeepers in Georgia’s core territory.”

Under a French brokered ceasefire deal, Russian troops are not allowed to control any Georgian towns such as Gori or major roads.