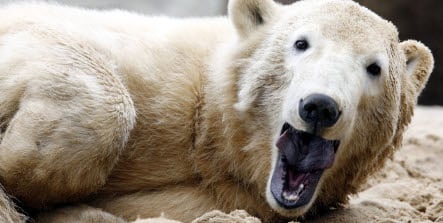 “Climate protection is one of the central challenges in worldwide politics,” parliament representative Ulrike Flach told the paper. “There is hardly any other animal that represents the consequences of climate change as clearly as the polar bear.”

But the Free Democratic Party member, who specializes in government budget concerns, criticized the adoption as a “personal PR campaign of the minister’s taken from the taxpayer’s wallets.”

“This is an irritating example of how public funds can be misused,” Flach added. The Environment Ministry took over the cost of feeding Knut when Gabriel became his godfather.

The polar bear was born on December 5, 2006 at the Berlin Zoo. His twin brother died and his mother rejected him, prompting the zoo to raise the tiny bear by hand. He has gained worldwide fame, gracing the cover of Vanity Fair and receiving more than 5 million visitors.