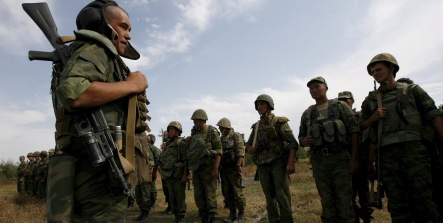 Russian soldiers listen to an order to withdraw on August 20. Photo: DPA

“At the moment there is contradictory information, but we have no firm evidence indicating that the Russian withdrawal has really begun,” government spokesman Thomas Steg said.

“The situation is very unsatisfactory … The withdrawal has to be completed by midnight on Friday as agreed,” Steg told a regular government press conference in Berlin.

Russian President Dmitry Medvedev has vowed that all but 500 Russian troops would be pulled out of Georgia on Thursday and Friday.

Steg also insisted that a planned US missile shield in eastern Europe was not directed at Russia, after Washington signed a deal with Warsaw on Wednesday to station 10 interceptor missiles in Poland.

“For us the missile defence shield is not pointed at Russia but… can be seen as a European defence system against threats from other regions” such as Iran, Steg said.

He added that it was a “very sensible gesture” by Polish Foreign Minister Radoslaw Sikorski to say that Warsaw remained open to talks on the shield, including with Moscow.

The shield, which also includes a proposed radar facility in the Czech Republic, has angered Russia and has become a major bone of contention between Moscow and Washington.