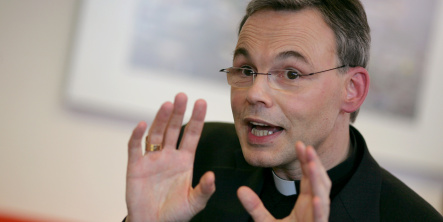 Church officials felt they could no longer trust Peter Kollas, a dean of priests in the city of Wetzlar, because he contravened church teachings on marriage, Bishop Franz-Peter Tebartz-van Elst said. Though German law allows a form of gay marriage, the Catholic church does not recognize the unions.

Believers “have a duty to protest the legal recognition of homosexual partnerships,” Tebartz-van Elst said.

The Lesbian and Gay Federation in Germany (LSVD) called the suspension an “act of remorseless irreconcilability” with the gay community and said the priest had been punished for showing his humanity.

Green Party whip Volker Beck, a spokesman for the party on human rights, said the church had acted with “Pharisaical bigotry and pitilessness.” Beck said decades of cases of child abuse by priests, not the blessing of a gay couple,had harmed the church.

Kollas, 55, had served as a dean in the German region of Hesse since 1996, representing the bishop in the district around Wetzlar. He consecrated the gay couple’s marriage on Friday in the Wetzlar cathedral, before an audience of 150 guests, after a civil ceremony in the city registrar’s office. A Protestant cleric also participated in the ceremony.

Protests after the wedding came from both the Protestant and Catholic churches, according to the Limburg diocese, which said it stripped Kollas’s leadership position in order to prevent “further damage.”

Kollas will be allowed to retain his position as a priest.