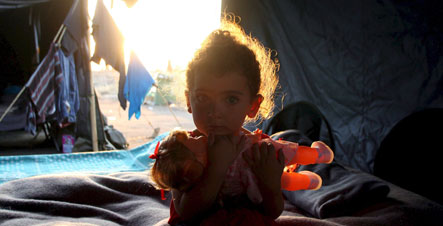 A Georgian girl from Gori at a refugee camp. Photo:DPA

“Apart from ending hostilities our top priority must be to alleviate the suffering of the many people who are injured or who have been driven from the conflict areas of South Ossetia and Abkhazia,” German Foreign Minister Frank-Walter Steinmeier said in a statement.

According to the UN refugee agency some 158,000 people are in need of help in Georgia after being driven from their homes by the recent fighting, the statement said. Aid organizations have been prevented from gaining access to South Ossetia to assess the huminatarian situation there, it added.

UN agencies and non-governmental organizations meanwhile have appealed for $58.6 million (€40 million) to provide relief for civilians affected by the conflict.

Steinmeier said earlier on Tuesday that Russia must withdraw its troops “at least from the heart of Georgia” for a durable ceasefire in the region to be possible.

“We are pressing Russia to withdraw its troops at least from the heart of Georgia to make it possible for talks on a durable ceasefire,” Steinmeier said as he arrived for a meeting of NATO foreign ministers in Brussels. “The most important thing at the moment is to consolidate the situation which is still fragile and to bring about a lasting ceasefire.”

Steinmeier did not say what he meant by the “heart of Georgia” but the reference could be taken to mean all Georgian territory apart from the two separatist regions of South Ossetia and Abkhazia.

Russia has engaged to withdraw its troops from Georgia but there was no sign on Tuesday of that happening, the Georgian interior ministry said. British Foreign Secretary David Miliband, also arriving for the talks, said it was “absolutely clear that Russia needs to live up to the commitments that President (Dmitry) Medvedev has made. and live up to them immediately.”

However he argued against isolating Moscow diplomatically. “The right response is hard-headed engagement,” Miliband told reporters as he arrived.

Miliband added that the priority remained Georgia. “We are clear that a democratic and sovereign government needs to be defended,” he said.

Georgian Foreign Minister Eka Tkeshelashvili, who arrived for bilateral talks with NATO foreign ministers said: “We expect an evaluation of what has happened in Georgia and the ways NATO can help.”