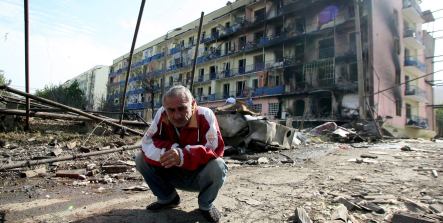 Some 300 German citizens were still in Georgia and the German embassy was taking steps to contact them to give them a chance to leave the country if they wished, ministry spokesman Jens Plötner told a news conference.

Plötner stressed that the Germans were not being “evacuated” but were leaving voluntarily. He added that the German embassy in Tbilisi was also ready to help citizens from other European countries.

“There is no reason for panic but we are calling on all German citizens … to contact the embassy,” he said.

Russian planes bombed radars at Tbilisi airport and hit civilian targets in the city of Gori near the border with South Ossetia on Monday, a Georgian Interior Ministry spokesman said.

The UN refugee agency said that up to 80 percent of Gori’s population of 50,000 have fled the city – the main Georgian city near to South Ossetia – because of Russian attacks.

German Chancellor Angela Merkel spoke by phone with Georgian President Mikheil Saakashvili on Monday morning and repeated her call for an immediate end to all violence, her spokesman Thomas Steg said.

Merkel said it was “essential that there is an immediate and non-conditional ceasefire and for all armed forces to withdraw to the positions held before the conflict” and that “the territorial integrity of Georgia should be respected,” Steg said.

He added that a meeting between Merkel and Russian President Dmitry Medvedev in Sochi on the Black Sea would take place on Friday as planned, but that contrary to the original agenda “practically the only topic” of discussion would be the current conflict.

German Foreign Minister Frank-Walter Steinmeier has also spoken several times by phone with his Russian and Georgian counterparts, and also took part in a conference call on Sunday with other EU foreign ministers, Ploetner said.