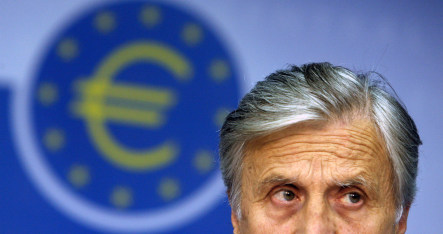 Does Trichet see beyond the crunch? Photo: DPA

But demand for lending has also fallen and banks are still reluctant to extend credit because they think the economic climate will darken further, analysts pointed out.

The ECB’s July survey of more than 100 eurozone banks found “somewhat lower net tightening of credit standards” for businesses and for home purchases than in the first quarter of the year, it said. But the trend was still orientated towards tighter credit standards, while demand had weakened as a result of fewer corporate takeovers, slumping housing markets and falling consumer confidence, the ECB said.

“Banks are concerned with the state of the economy, that’s clearly the number one factor behind the tightening of credit standards,” Bank of America economist Gilles Moec told AFP. “They dont want to engage in too much lending because they are afraid of seeing default rates increase.”

Conditions for consumer credit had in fact become slightly tighter, the ECB said. Banks said credit standards were set to tighten further for businesses, but remain unchanged for households.

In terms of demand, banks noted a drop by both businesses and households, in the former’s case because of fewer mergers and acquisitions, less corporate restructuring and a trend towards internal financing.

A fall in demand for fixed investment loans “doesn’t bode well for the investment outlook given that this sub-index has always proven to be a good leading indicator of capital expenditure,” noted UniCredit Markets chief economist Aurelio Maccario.

Households, meanwhile, were seeking fewer loans because housing markets were under pressure and owing to deteriorating consumer confidence. The ECB questions senior loan officers at 112 representative banks to get a feel for lending conditions every four months, and has been providing money markets with plenty of cash to ensure a continued flow of credit on which business depends.

But Moec also pointed to other statistics that have shown increased bank lending until recently, and said: “What has really been striking me since last summer is the big difference in what they say they are doing and what they seem to be actually doing.”

He suggested that commercial banks could be demonstrating “a bit of strategic behaviour” aimed at getting the ECB to lower its main lending rate. To begin with, banks might seek to reassure the ECB “that credit standards are being tightened in the current circumstances,” he said.

In addition, “the banks want the ECB to cut rates. The more they are gloomy in the survey, the more it may have a bearing on the ECB’s reaction.”

ECB president Jean-Claude Trichet told a press conference on Thursday after the bank kept its main lending rate at 4.25 percent that “we have (seen) a level of loans to the private sector which is still quite dynamic.” And he added that while loan signals were clear in certain domaines, “in others they are complex,” including those regarding non-financial businesses.

Citi economist Jürgen Michels told AFP it just took time for banks’ decisions to show up in economic activity. And because the situation was very different depending on which euro-zone country you were in, German consumers might not have much to worry about, but “in countries like Spain it will get really difficult to get a new loan.”