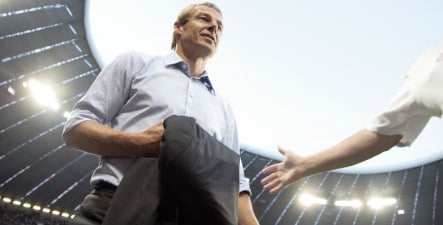 It always going to look like you’re compensating for something when you present someone a huge trophy you’ve named after yourself.

Italian football club Inter Milan won the honorary “Franz Beckenbauer Cup” on Tuesday night in the Allianz Arena in Munich, having beaten their hosts Bayern Munich 1:0 in the pre-season friendly. Beckenbauer himself, German footballing legend and still Bayern president, turned up to present the immense cup to Javier Zanetti. The Inter captain wrestled manfully with the torso-sized jug for a couple of seconds before its lid surrendered and clattered onto the turf.

Thankfully Beckenbauer is still limber enough to retrieve fallen silverware and laugh off the metaphors, but Bayern are going to need more of his Bavarian chutzpah to raise the darkening mood as their first competitive match looms this weekend – a cup-tie away in Erfurt. The eastern German city isn’t exactly considered a football powerhouse in Germany, however, Bayern’s new coach Jürgen Klinsmann cautiously called the match “an extremely difficult task,” much in the manner of a rookie heart surgeon sharpening his scalpel for the first time.

Klinsmann might still be adored in Germany for his efforts with the national team as the country’s hosted the World Cup in 2006, but the contrast between his Bayern side and Inter Milan was rather revealing.

Arriving with their own brand new star coach Jose Mourinho and the luxury of another three and a half weeks before the Italian season begins, they fielded a languid second-string team still tanned from time at the beach. That team contained Bayern’s early pressure with nonchalance, broke decisively down the left at the beginning of the second half to score, then retreated to let Bayern run at their defence like a disorganized English stag party trying to get into an exclusive nightclub.

Some of Bayern’s attacking midfielders distinguished themselves when they got the ball – particularly Hamit Altintop and the 18-year-old new hope Toni Kroos – but Germany’s favourite Polish strikers Lukas Podolski and Miroslav Klose might as well have sat in the stands.

It was a sorry affair, but then Klinsmann is presiding over a decimated team. As many as eight first-team players will be missing for the opening match of the season, including stars Luca Toni and Franck Ribéry, the Mediterranean geniuses who between them scored or set up virtually all of Bayern’s goals last season. On top of this, veteran French international Willy Sagnol suffered a career-threatening injury to his Achilles tendon, and the Argentinian Martin Demichelis went down with a calf injury during the Inter match. Two more South Americans, Breno and Jose Sosa, are away competing in the Olympics.

But even without these absences, Klinsmann admits that Bayern are not as ready as they would like to be. The inspirational leader of Germany’s 2006 World Cup is taking his usual chainsaw approach to management by replacing working methods at the club on all levels, including the spiritual, but the process looks like it will be a slow one.

He has introduced a system involving nine different trainers, talked sagely of a new philosophy, and decorated the fancy new training facility with Buddha statues – much to the consternation of some of the club’s Catholic Bavarian fans. Of course, he says, it will take time for his new regime to take effect. “How much time?” reporters asked, smelling a weakness. “Months, maybe one or two years,” came his typically cautious reply.

Alarm spread through the Bavarian media when Klinsmann’s glacial timescale sunk in. Bayern is a team that sets itself different standards than other German clubs. It considers the season a failure if they only win the league and the German Football Association Cup. The club’s power lies with a fearsome triumvirate of legends – Uli Hoeneß, Karl-Heinz Rummenigge and Franz Beckenbauer – that controls all aspects of the club’s affairs. Hoeneß spends every match glowering at the coach’s shoulder like a highly-strung guard-dog and Rummenigge is quick to purge when standards slip.

Ottmar Hitzfeld recognized this last season, leaving after guiding Bayern contentedly to the two domestic trophies while reaching the UEFA cup semifinals. Both sides decided he didn’t have the necessary ambition to take Bayern further, and he left to take over the much friendlier job of leading Switzerland’s national side. He can now be heard making sceptical noises about Klinsmann’s coaching substance. “I managed Bayern for six years the first time round, but it scarred me,” he warned.

Bayern’s first four results under Klinsmann are not particularly flattering, even if they were only friendlies – one win (4:2 against the Urawa Red Diamonds in Tokyo), one draw (0:0 against FC Cologne) and two defeats (1:2 against Dortmund and now the 0:1 against Inter Milan).

Barring an unlikely strong start to the season, perhaps those Catholic Bavarian fans will need to get used to the Buddhist tenet that all life is suffering.