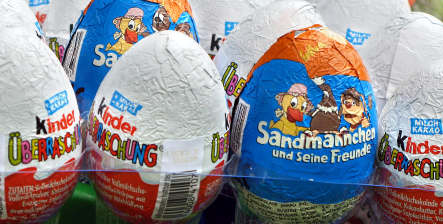 Vast quantities of the chocolate eggs with a toy inside are sold every year in Germany, but according to a parliamentary health commission it is dangerous to combine food and toys in one product, the daily newspaper Die Welt reported on Thursday.

Gruß backed away from her comments later in the day on Thursday, saying she never meant to advocate a complete ban.

“We just want to prevent a worst-case scenario wherein a child could choke on a toy out of a combination product like this one,” she said.

A spokeswoman for Ferrero, the Italian confectionery firm that has made the eggs since 1974, said a ban would be unjustified as the figures or toys are enclosed in a yellow plastic capsule.

“There is absolutely no evidence that there is an increased danger from the combination of food and toys,” Ferrero spokeswoman Elise Glaab told Die Welt.

Ferrero brings out 20 new sets of figures every year for the eggs, as well as 150 new kits for toys that have to be put together with the help of a tiny instructions sheet, the paper said.

The commission is also looking at forcing youngsters to wear cycle helmets and making schoolbooks lighter so children don’t injure themselves or tire themselves out carrying them around all day, the paper added.