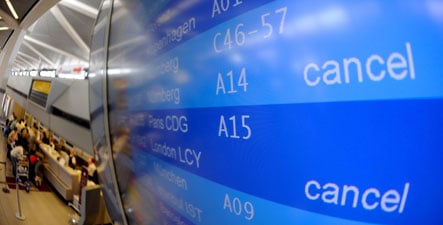 Pilot union Cockpit called a 36-hour strike for CityLine’s more than 700 pilots in an effort to increase pressure on Lufthasa in ongoing wage negotiations. Pilots walked off the job at midnight Thursday and will stay on the picket lines until Friday noon.

The limited strike will keep some 360 flights on the ground Thursday. CityLine flies exclusively European routes, but predominately ones that aren’t regularly serviced. Flights from Frankfurt, Munich, Hamburg, Düsseldorf, Berlin-Tegel and Leipzig are affected. Lufthansa asks passengers to call 0800-850 60 70 or look at the airline’s website www.lufthansa.com for more information.

The labour dispute is separate from the five-day strike last week by ground and flight crew personnel that caused Lufthansa to cancel hundreds of flights. Although the airline came to an agreement with trade union Verdi to end that strike, service is still not completely back to normal due to the contingency plan Lufthansa implemented.

Cockpit said it was forced to call the new strike, because Lufthansa has refused to offer an acceptable wage deal to CityLine pilots. The airline wants to pay the pilots between 5.5 and 6.5 percent more over an 18 to 24-month period, but Cockpit has rejected that as a basis for new negotiations.