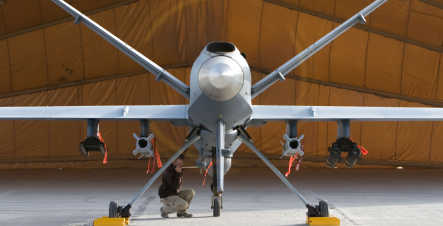 “There are no plans to purchase a fighter drone for the Bundeswehr,” a spokesman for the Defence Ministry in Berlin said.

In notifications to the US Congress, the Defense Security Cooperation Agency said late on Monday that Germany had requested a possible sale of five of the unmanned combat aircraft while Italy, another NATO ally, was seeking four.

Both countries wanted the new drones “for the defense of deployed troops, regional security and interoperability with the United States,” the agency said.

Known as a hunter-killer drone, the Reaper can carry four Hellfire missiles and two 500-pound laser guided bombs, and remain aloft tracking a target for long periods of time.

“By acquiring this capability, Germany will be able to provide the same level of protection for its own forces as those of the United States,” the agency said, noting that Germany has over 3,000 troops in Afghanistan.

The DSCA estimated a sale to Germany, with one year of maintenance support, to be worth $205 million.

But the German government has been particularly reluctant to join combat missions in the south of Afghanistan despite calls from NATO allies for the Bundeswehr to take part. And any change in the German military’s mandate in the country – including flying armed drones – would need parliamentary approval.