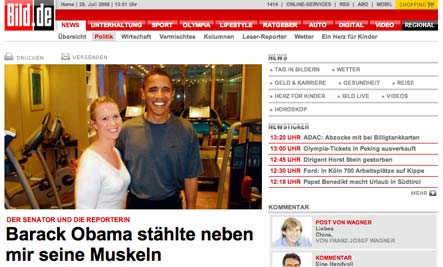 Bild reporter Judith Bonesky’s article, “Bild reporter in the gym with Obama,” published on July 25, gushes with sexual innuendo over Obama’s “firm rear end” and “well-trained arms,” and ends with the phrase, “WHAT A MAN!” The article features a candid shot of the reporter with Obama, and both are smiling.

But Obama told New York Times columnist Maureen Dowd over the weekend that his encounter with Bonesky at the Berlin Ritz Carlton gym was a set up.

“I’m just realizing what I’ve got to become accustomed to,” he told the paper on Sunday. “The fact that I was played like that at the gym. Do you remember ‘The Color of Money’ with Paul Newman? And Forest Whitaker is sort of sitting there, acting like he doesn’t know how to play pool. And then he hustles the hustler. She hustled us. We walk into the gym. She’s already on the treadmill. She looks like just an ordinary German girl. She smiles and sort of waves, shyly, but doesn’t go out of her way to say anything. As I’m walking out, she says: ‘Oh, can I have a picture? I’m a big fan.’ Reggie [his assistant] takes the picture.”

The unauthorized article was a blow to Obama’s carefully orchestrated media image. He has not allowed European journalists to travel with his campaign, and the German media has criticized the presumptive Democratic presidential nominee for denying them interviews during his stop to their country.