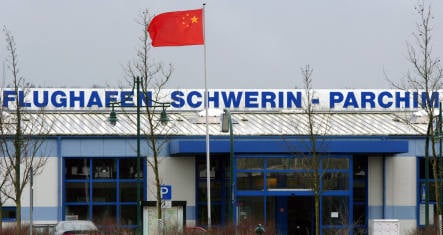 At a sleepy airstrip in northeastern Germany, a red flag with gold stars flies above the miniature passenger terminal in honour of its new owners, a Chinese logistics company. The firm is hoping to turn this corner of the state Mecklenburg-Western Pomerania into a way station for the flood of Chinese goods entering Europe.

These days, a lone cargo warehouse stands forlornly a few hundred metres away from the seldom-used terminal, but it isn’t likely to stay that way for much longer.

“This is terminal number one. Now it just says cargo terminal, but we’ll add numbers once we build more,” airport operations manager Eugen Arnstadt said. “But soon we’ll have four or five terminals in this area.”

Dubbed a “century-long project” by Jonathan Pang, the CEO of Link Global Logistics, the new owner, the Schwerin-Parchim airport will soon become a busy air cargo hub connecting China to Europe, that is, if high jet fuel prices and a weakening global economy don’t snuff out the project. It is the first time a Chinese company has acquired the rights to operate a European airport.

In a deal signed last year, Link Global agreed to pay €30 million ($47.1 million) to purchase the former military airbase from the local county, located in Parchim, an economically depressed area about two hours drive from both Berlin and Hamburg.

An Australian commercial real estate investment firm, Goodman International, announced in June that it will invest €100 million to transform the site from a backwater that currently hosts small private planes and a few cargo flights a week into a new hub.

Groundbreaking on the huge new warehouse and business park facilities is set to begin in August.

Along with the new cargo terminals, the site will contain an industrial park where partially completed Chinese goods, such as electronics and apparel, will receive their final assembly. The Nanjing High Tech Zone, a government-owned company from eastern China, was the first tenant to sign a contract for over 100,000 square metres of space on the site.

“Many companies in China are highly interested to do the final assembly of their products in Germany, to get the label, ‘Made in Germany,’” said Werner Knan, Goodman’s managing director in Germany.

Knan said scores of firms from both China and Europe have expressed interest in the site, which encompasses 850 hectares.

But one potential risk is the skyrocketing price of jet fuel, which has hit the air freight industry especially hard as many small freight airlines use older, fuel-inefficient aircraft. Link Global has responded by shipping much of its cargo by train to Urumqi, in far western China, before flying it to Parchim.

The unlikely story of how a small town in a remote corner of the country became ground zero for Chinese investment in Germany starts with the airport’s long history as a military installation.

During the Third Reich, Parchim was an important base for German fighters assigned to attack British and American bombers. The world’s first operational jet fighter, the Me-262, was based in here.

After the Soviet Union occupied Parchim, it stationed fighters and attack helicopters at the base, which is located only 30 kilometres from what used to be the border between East and West Germany.

The Soviets withdrew at the end of the Cold War, but left behind a modern 3,000 metre runway big enough to handle the world’s largest aircraft, including giant Russian transport planes and Airbus’s new A380 super-jumbo jet.

The local and state governments tried to operate Parchim as a passenger airport directed at budget airlines, but those attempts failed, as did two earlier attempts to privatize the airport. But it had one other extremely valuable asset according to Link Global’s Pang.

“This airport is one of the rare airports in Europe to operate 24 hours, without time restrictions,” Pang said. That’s a necessity in the air cargo business since airports in urban areas often have to close by midnight and can only reopen at 5 am due to local noise ordinances.

To drum up interest for the airport, the local county administrator, Klaus Iredi, started visiting China three years ago to pitch the airport as a logistics hub to serve the rapidly-growing trade between China and the European Union.

“We tried to sell the airport to an English company, but they wanted to use it as a passenger airport and I didn’t think that was very practical,” Iredi said. “The growth in the freight industry is enormous and in my eyes, it was the only chance for our region to add jobs.”

The area around Parchim has suffered economically since German reunification in 1990. Unemployment is currently 16 percent and to many locals, the airport’s new role as cargo hub may be the best chance to find a well-paying job.

According to Udo Mitzleff, a Parchim-based editor for the Schweriner Volkszeitung, a regional newspaper, the local authorities are already gearing up for a slew of new jobs.

“The employment office here is already training the unemployed with an emphasis on logistics. For example, people are getting certified as forklift operators so that they’re ready once the skilled labour is needed,” Mitzleff said.

Although the mood among locals is generally positive about the Chinese coming to town, Mitzleff said there are worries that Link Global isn’t interested in creating jobs for Parchim’s jobless.

“The problem is that it’s getting taken over by a Chinese firm and I wonder whether there will be jobs for Germans or whether they’ll bring in Chinese workers who will work for much lower wages,” said resident Wiewza Christian, recounting a persistent concern in Parchim.

Link Global officials deny they are planning on bringing in an army of Chinese workers and insist German labour laws will apply to the site.

But the mere existence of such rumours suggests that Parchim’s residents, long isolated from the outside world by both the Iron Curtain and economic distress, remain unsure about tying their troubled economy to China.