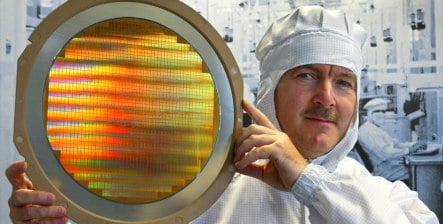 “It will be necessary to reduce headcount by a gross figure of approximately 3,000 employees,” a company statement said. “This figure refers to all sites, functions and levels across the company.”

Two-thirds of the cuts would affect German jobs and outright dismissals were not excluded, new Infineon boss Peter Bauer told a telephone press conference. The cuts were part of a broader programme designed to save the company €200 million ($315 million) per year.

He referred to a recent announcement by Siemens, which is also based in the southern German state, of its plan to eliminate 17,000 posts worldwide. Neugebauer said Infineon had suffered from “an endless string of management errors, and once again it is workers that will bear the consequences.”

Infineon employs a total of 43,000 people, including 13,500 at Qimonda, a loss-making subsidiary that it wants to sell.

Bauer said he wanted to wrap up the job cuts by late September 2009, and that he sought to “cede control of Qimonda by our general assembly next February.”

The German group owns a 77.5 percent stake in Qimonda, which produces memory chips. But Bauer denied rumours that his group was open to a takeover or merger of

In the three months to June, the third quarter of its 2007/2008 fiscal year, Infineon lost 592 million euros, following a loss of €1.37 billion in the previous quarter, the company’s statement said.

The latest loss arose in part from a writedown of €411 million in the value of its stake in Qimonda, which posted late Thursday its own quarterly loss of €592 million.

Infineon said that sales in the quarter had amounted to €1.03 billion, down 2.0 percent from the previous quarter. At the operating level however, Infineon managed to turn in a profit of €71 million, well above analysts’ expectations.

It has already warned that fourth quarter results would be hit by one-off restructuring costs, and investors focused on the operating profit figure, driving Infineon shares up by 2.69 percent to 4.96 euros in midday trading on the Frankfurt stock exchange.

Infineon shares lead gainers on the Dax index of blue-chip stocks, which was 1.48 percent lower overall.