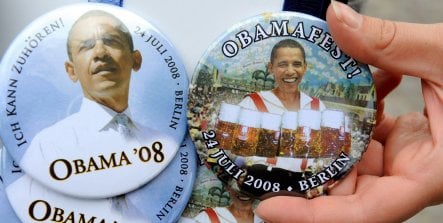 The presumptive Democratic nominee’s speech in front of over 200,000 adoring supporters near the city’s Victory Column memorial on Thursday cemented his status as a political pop star in Germany.

German Chancellor Angela Merkel’s spokesman Ulrich Wilhelm said on Friday that the German leader considered the speech a “positive signal for and to Europe” and Obama had made clear “tackling the challenges of the 21st century can only be achieved together and through international cooperation.”

Like many German newspapers, Berlin daily Der Tagesspiegel plastered a photo of Obama waving to the massive crowd on its front page.

“Never before have so many young people come together for a political gathering in Gemany,” the paper said. “The people here – like many Americans – attach an almost messianic hope for political renewal” to Obama.

Berlin’s Mayor Klaus Wowereit hailed Obama’s 30-minute outdoor address as “courageous” and “a sign that US politics are heading in a new direction.”

“He’s become the personification of yearning in Germany for the antithesis of George W. Bush’s aggressive provincialism,” opined the left-wing daily Die Tageszeitung. “Obama is the master of the ‘we’ feeling. That’s the key to why he’s celebrated like a pop star.”

The centre-left Süddeutsche Zeitung said Obama had the right stuff to become the next US leader.

“He will improve America’s standing in the world,” it said, but warned “there is no doubt that he will demand more of Europe to be successful in Afghanistan and Iraq. Obama will be costly for Germany.”

The Munich-based paper also said Berlin was the obvious choice for Obama’s only encounter with the public on his week-long international tour. “Most Americans consider Germans their true friends, despite Iraq,” it said, referring to the overwhelming opposition here to the US-led invasion. “Germans are not as rebellious as the French or as obedient as the Britons.”

The conservative daily Die Welt said Obama’s lofty goals had endeared him to the German public, but it also said he was setting up great expectations: “Obama did not acknowledge that many attempts to change the world have ended in tragedy.”

The foreign policy spokesman for the ruling conservative Christian Democrats, Eckhart von Klaeden, said the clear message was that Europe and the United States could only confront the world’s problems together.

“That means sharing the burden and making sacrifices,” he told the online version of newsweekly Der Spiegel. “His speech was American in the best sense and, apart from a few personal nuances, could have been held by John McCain.”

But his counterpart with the conservatives’ coalition partners, the Social Democrats, Gert Weisskirchen, said Obama had much broader appeal.

“That was the speech of world citizen aimed not only at Germans and Europeans, but also Americans,” Weisskirchen said.

It seems Berlin’s Victory Column can add another triumph to its list.