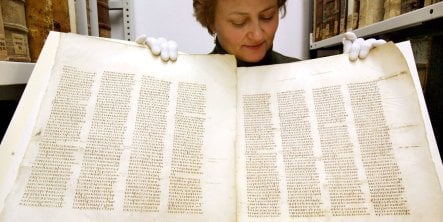 The Codex Sinaiticus, which dates from the fourth century, is one of the two most ancient copies of the entire Bible in Greek. The other is the Codex Vaticanus.

The manuscript was uncovered by a German scholar in St Catherine’s monastery in the Sinai desert. Much of it, written on some 350 pages of vellum, ended up in St. Petersburg. In the 1930s, most of this treasure trove was then sold by Stalin to the British Museum in London.

Some 40 pages also ended up going to Leipzig University, while yet more pages were found in the 1970s in a walled-up room at St Catherine’s monastery. The project, sponsored by the British Museum and Leipzig University, aims to put the bible back together in digitalized form – scanning all the pages held in Britain, Germany, Russia, and Egypt – and making it available on the internet.

As of Thursday, “more than 100 pages, those from Leipzig and 67 from the British Museum, will be available online at www.codex-sinaiticus.net,” according to Leipzig library curator Ulrich Johannes Schneider.

Another part of the Codex will be made available in November and the remainder by next year, according to Schneider.

The codex, which is believed to contain the most accurate version of the New Testament, can be viewed online in high-definition pictures, with a full transcript of the Greek text, and translation into English and German of some key passages.