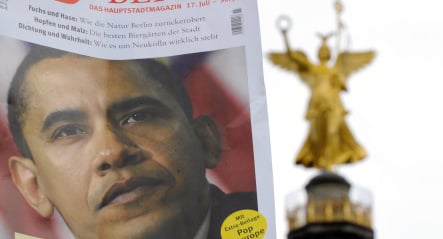 The Democrat presidential candidate’s trip next week has provoked great excitement in Berlin, with various attempts to make the best political capital out of a speech, be it set before the Brandenburg Gate or as now seems most likely, at the Victory Column.

Josef Braml, a political commentator, told the German Association for Foreign Policy this week, “He is not going to be the Messiah.”

And as for re-setting the relationship between Germany and the USA after eight years of often tense ties during the Bush administration, Braml warned that German commentators were in danger of forgetting Obama’s reasons for coming to Germany.

Rather than gently letting Germany off the diplomatic hook for refusing to help in the Iraq invasion and offering only limited military assistance in Afghanistan, Obama is likely to use the German trip to show critics at home he can be tough overseas.

He suggested this might be particularly applied to Iraq, where the deal could be no soldiers but more money, while in Afghanistan the pressure would be increased for Germany to play a more active military role, no matter who occupies the White House.

Obama arrived in Kabul on Saturday on a previously unannounced trip, ramping up the foreign policy side of his campaign to be elected US president this November. He is due in Berlin on Thursday, when some media reports suggest a fan mile similar to that set up for the football, could be constructed along the Berlin’s major traffic artery the Straße des 17. Juni so people can watch his speech.

The Obama election campaign will be paying for all arrangements, it was reported, while the fan mile concept is thought to be favoured as it would enable television pictures to be shot of him by the Victory Column as well as of avid fans by the Brandenburg Gate.