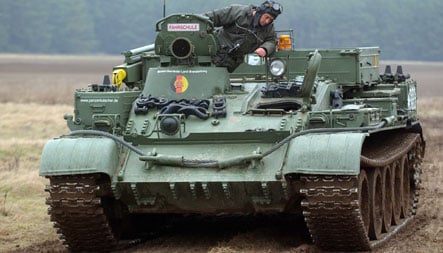 Axel Heyde atop a T-55 a few years ago. Photo: DPA

The tank crews are not soldiers but tourists who have paid €136 ($215) for the chance to be a weekend warrior at the wheel of a 34-tonne vintage armoured vehicle.

Every year some 10,000 thrill-seekers from all over the world pass through the so-called “Tank Driving School” in Beerfelde, a tiny town between Berlin and the Polish border.

It was founded in 2003 by a former soldier in the now defunct East German army, Axel Heyde, 47, who said he has been obsessed with tanks all his life. “When I was a little boy, I dreamt of driving a tank. My dream came true and today I manage to make a living from letting other people have fun driving tanks,” he explained.

But Heyde swore that bashing through a pot-holed field on the edge of the forest in a piece of basic but near indestructible machinery has nothing to do with nostalgia for the communist period.

“Our customers come from all over Germany but also from abroad, from the United States or New Zealand. In fact, they are not necessarily war game freaks,” he said. “What draws people to driving tanks is that they feel they get to slip into a secret world, open only to a select few, and one that is also a little bit dangerous.”

Heyde said he salvaged the vehicles – T-55s or BMPs made in Poland or the former Czechoslovakia in the 1950s – from the post-Soviet scrap heap. The tanks have been partly “disarmoured”, which involves not only spiking the guns but also removing bits of armoured plating in order obtain a leisure operations license.

Even so, they hardly make for an easy ride.

Before settling into the driver seat, the novice tank operator dons a black cotton hood and a padded helmet with a rough, antique look and feel. He then clambers into the driver’s seat through a top hatch, grips the levers that stand in for a steering wheel and tries his best to follow the driving instructions.

“Pull, pull, harder, don’t hold back. Don’t be frightened if it starts shaking really hard!” barks an instructor in the radio headphones. Though seated next to his pupil, his voice would otherwise be drowned out by the roar of the 600-horsepower engine.

To move left or right, you have to pull a lever on either side. To lurch forward, you need to push both simultaneously with every ounce of strength and instead of a windscreen, you just have two tiny hatches cutting visibility to close to zero. Once you have the hang of it, you can consider the optional extra of asking for an old car to crush.

At the end of their maiden drive, most new tank commanders emerge covered in dust and glory to pose proudly with elbows resting on the hatch like battle-hardened veterans. They can even take home a DVD of their exploits thanks to a camera installed inside the tank.

“It was wonderful,” said Werner Roeder, a technician from Berlin who posed with his wife beside the tank after tearing up the field in a choking, deafening commotion. “It was her present to me for my 60th birthday. My only regret is that it was too short and that I did not go faster.”

Heyde’s colleagues concede that there are some who regret the fact that the tanks are no longer real, live gun-firing monsters. “They ask us where the guns are. They are a little bit disappointed that they can’t shoot at something,” said the company’s receptionist, Ute