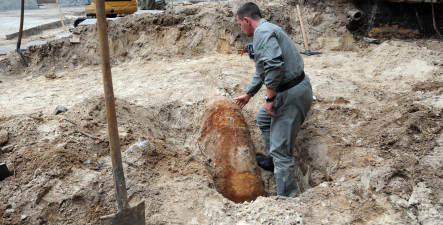 Tram lines and major roads were shut down and residents barred from their homes in Berlin’s Wilmersdorf district for 16 hours while police bomb experts worked to defuse the complicated chemical detonator, police said on Wednesday morning.

Excavators found the bomb at a Mecklenburgstrasse construction site on Thursday afternoon, and police began evacuating the neighborhood at 10 pm. Residents were forced to stay at emergency accommodations or with family and friends.

The city mobilized a large-scale deployment of police, fire department and rescue workers that included some 400 emergency vehicles to help secure the neighbourhood. Water and gas companies were also alerted.

Bomb experts had initially hoped to defuse the bomb on site, but decided to transport it with a special vehicle to the nearby Wilmersdorf park to avoid having to evacuate a hospital near the bomb.

Police reported that the bomb was successfully defused via a controlled detonation early on Wednesday morning.

More than 60 years after the end of World War II, weapons recovery remains an important task for police and private companies throughout Germany. City-state Berlin and the surrounding state of Brandenburg, were some of the most heavily bombed parts of the country during the war.

The entire city of Berlin is considered potentially dangerous by bomb clean-up experts. Allied forces dropped more than 2.7 million tonnes of explosives across Germany during the war. Much of the ordnance did not explode and has become increasingly dangerous with time and corrosion.