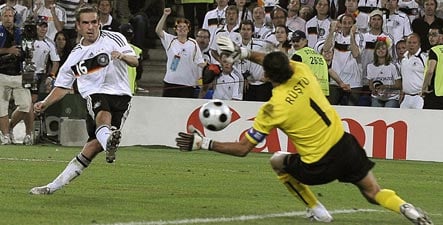 Semih Senturk had levelled for Turkey to make it 2-2 against Germany with just four minutes left. Ugur Boral had given Turkey a shock lead after 22 minutes, but Bastian Schweinsteiger levelled four minutes later.

Miroslav Klose had looked like giving Germany the decisive lead with a 2-1 lead with 11 minutes left. The winners play either Russia or Spain in Sunday’s final in Vienna.

“It was extremely tough. It was an amazing match right up to the end,” said Schweinsteiger. “With hindsight you can say that we did what the Turks have done so well up till now – scored a goal in the last minute.”

German fans took to the streets in spontaneous celebrations across the country immediately after the match. The party remained overwhelmingly peaceful and there were even scenes of Germans trying to console members of the country’s large Turkish population.

The match was a nail-biter not only because both sides refused to give up until the final whistle. Bad weather in Vienna, where the tournament’s global broadcast centre is located, caused repeated disruptions of the TV signal.

With the satellite connection broken, fans sat frozen in panic as German broadcaster ZDF furiously attempted to rig an emergency broadcast signal from Swiss television in Basel, where the match was held.

Few eyebrows were raised two years ago when Löw, 48, stepped up from being Klinsmann’s assistant at the 2006 World Cup after Germany claimed third-place having lost to Italy in the semifinal.

“He was always much more than an assistant coach to me,” said Klinsmann about the man he groomed to replace him.

But despite Löw’s side becoming the first side to qualify for Euro 2008, he has spent the last two years labouring under the popular mis-assumption he was simply carrying on his predecessor’s ‘revolution.’

During his two-year reign, Klinsmann changed the way Germany’s national side prepared and moved them away from a defence-orientated style to fast-attacking football. The German media are still obsessed with the ex-Inter Milan striker – reporting with enthusiasm whenever Klinsmann send the team a good luck message – almost two years after leaving his post.

But Löw will now receive recognition in his own right for putting Germany in a final for the first time since the 2002 World Cup. He has not enjoyed an easy road to Sunday’s final.

After his team saw off Poland with a 2-0 win to begin their Euro 2008 campaign in style, Löw was left fuming when his side slumped to a shock 2-1 group stage defeat by Croatia, before they rallied with a 1-0 win over Austria.

He promised to “give each and every player a piece of my mind” after the Croat defeat, but showed his tactical mettle in the quarter-final against Portugal at the St Jakob-Park stadium in Basel.

Having abandoned Germany’s trusted 4-4-2 formation, the Portuguese were blown away as Loew’s side romped to a 3-2 win by playing an innovative 4-5-1 formation to book their final four berth.

And as far as defender Per Mertesacker is concerned, Löw has taken Germany to a new level in the last two years.

“I think if you look back on the last two tournaments, we haven’t achieved all this by chance,” said Werder Bremen’s Mertesacker. “Playing on home turf was a major advantage in 2006, but in 2008 we have matured and had to earn this with no outside help. Jürgen Klinsmann has left, his legacy has lived on, but we are in the final by our own rights, not by luck.”