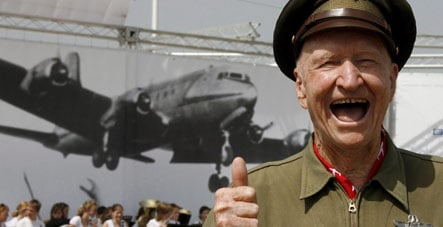 The 'candy bomber,' Gail Halversen, at Tempelhof in May 2008. Photo: DPA

On June 25, 1948, the western wartime Allies began a massive operation which kept divided Berlin’s western sectors supplied with food, coal and other provisions during a Soviet blockade—one of the opening salvoes of the Cold War.

German Chancellor Angela Merkel said in a tribute to the rescue effort at an airshow in Berlin last month that the Airlift had convinced beleaguered West Germans of western resolve in the face of the Soviet threat.

“Without the Airlift, history would have been very different,” she said.

Tensions between the western powers—Britain, France and the United States—and the Soviet Union steadily mounted in the postwar years and threatened to come to a head when the deutschemark was introduced in West Germany and West Berlin.

Seeing the new currency as part of a power grab by the West, Josef Stalin closed off all roads and supply routes to West Berlin, aiming to surround and conquer the free enclave in the Soviet-occupied zone.

Operating almost non-stop and through the harsh German winter, the Airlift carried over two million tonnes of supplies in more than 270,000 flights, mainly into Tempelhof Airport just outside Berlin’s city centre.

Thirty-nine British and 31 US pilots lost their lives before the operation wound down in May 1949 when the Soviets called off the blockade.

But shipments continued until September of that year to build up a surplus in case of another attempt by Stalin to cut off the West.

“Truman did not want to use force in this case,” Berlin historian Wolfgang Huschke, who has written a new book on the Airlift, told German radio.

“He focused entirely on the Airlift and, as the Cold War was starting, handed the Soviets and their ideology their first major defeat without a single shot being fired.”

Dagmar Hoerner was six years old at the time, living with her family in the British-occupied sector of Berlin. She said the ferried supplies were a literal gift from the heavens.

“It was a time when we played among the ruins, when a carrot was a luxury and my mother made me clothes from her old frocks,” she said.

Events are planned throughout Germany to mark the extraordinary show of Cold War solidarity that helped cement the western alliance and transatlantic ties in particular.

Former pilot Gail Halvorsen, known as the candy bomber for dropping sweets from his DC-3 with handkerchief parachutes into the hands of delighted Berlin children, will return to the city for the celebrations along with fellow veterans G.C. Lamb of Britain and Roger Degen of France.

They will attend the opening of an exhibition on the Airlift, meet with Berlin schoolchildren and Mayor Klaus Wowereit, and attend a commemoration event at Tempelhof Airport.

Berliners staged an emotional but ultimately unsuccessful bid earlier in April to save Tempelhof from closure and enlisted the city’s vivid memories of the Airlift as part of their campaign.

Meanwhile the German Historical Museum has opened an exhibition showcasing pictures of the Airlift taken by renowned US photographer Henry Ries, the son of a German Holocaust survivor.

And US military bases in the west of the country are throwing open their gates to German visitors, in some cases for the first time since the suicide hijackings of September 11, 2001.