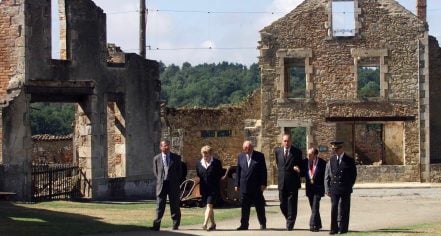 German forces killed 124 residents, including 42 women and 44 children, there on August 25, 1944, the day Paris was liberated, before leaving the village in ruins after a bombing campaign.

The killings were in reprisal for an attack the previous day by a small group of resistance fighters on German troops north of the village, near a strategic railway crossing.

“The youngest victim was three months old and the oldest was 89,” Sebastien Chevereau, who heads a memorial in Maille, told AFP.

“Here, we call it the forgotten massacre,” he said, because it is rarely mentioned in history books.

Chevereau said he hoped the German investigators who arrive in Maille on July 14 would help find information about the massacre as part of a joint effort to honour the memory of its victims.

Regional prosecutor Philippe Varin said it was ‘an extraordinary event’ for German investigators to come to France to probe World War II atrocities.

The team will hear witness accounts and try to identify the German units that took part in the massacre and “of course, the individuals” who could face war crimes charges, said Varin.

In France, the statute of limitation on war crimes is 30 years, but there is no such restriction in Germany.

Another village, Oradour-sur-Glane, is known by all French schoolchildren for one of the darkest chapters of World War II when German troops massacred 642 civilians, including 200 women and as many children on June 10, 1944.

The Maille investigation first opened in 1988 after information was uncovered in UN archives, but the case was closed in 1990 after not enough evidence was found to file charges.

It was re-opened in 2004 after university research into the massacre yielded new leads, prompting German police to take a second look.

A former Wehrmacht lieutenant, Gustav Schlueter, was convicted in absentia for war crimes in France in 1952 for the massacre, but he remained at large in Germany until his death in 1965.

German prosecutor Ulrich Maas in Dortmund said that the first probe had failed to make headway because investigators were unable to gain access to files in France.

French officials had also given their German counterparts with the wrong name of the senior officer who was convicted for the massacre: Schuler instead of Schlueter, said Maas.

To date, no German document identifying the units who carried out the massacre has been found, said academic researcher Jean-Luc Leleu.

“We would like to know which troops did this, and why. We would like to be able to tell the truth to our youth,“ said Serge Martin, 74, from Maille, who lost his parents, brother and sister in the massacre.

“Not a day goes by that I don’t think about August 25, 1944 and the massacre of my family,“ said Martin, one of the 28 children who became orphans that day.