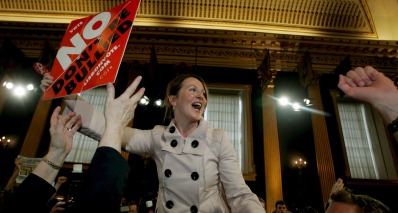 Stirring things up in the EU. Photo: DPA

The currency market reaction is similar to what happened three years ago when the French and Dutch rejected the EU constitution, with political uncertainty making investors nervous.

It is a similar situation today, some analysts say. “The ability of the European institutions to continue functioning is in danger,” Werner Becker from Deutsche Bank Research told reporters.

“Now we have to start from the beginning again. This will affect the markets for weeks.” He would not rule out a further drop in the value of the Euro following the one-and-a-half cent reduction in its value on Friday.

Political reaction took on an edge on Saturday after the largely woolly statements immediately following the result.

Frank-Walter Steinmeier, Germany’s foreign minister, said the EU should find a temporary way of continuing the integration process without Ireland.

He described the Irish rejection as a sharp setback for Europe and the integration project.

“There is absolutely no way of making this sound better,” he said during a trip to Peking.

He added that he was personally disappointed after the days and nights he had spent during last year’s German presidency of the European Commission, negotiating a political compromise on the treaty.

Political circles across Europe are buzzing with suggestions of how to proceed. A meeting of the European foreign minister council is planned for Monday to try to work out what to do next.