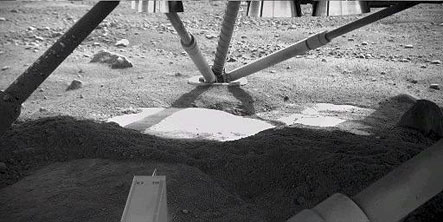 The first photos sent back to Earth from the probe show a bright surface next to the landing feed of the spacecraft, the Max Planck Institute for Solar System Research in Lower Saxony reported late on Monday.

“The structure that we can recognize from the images appears extremely smooth and rounded,” said Horst Uwe Keller, who directed the development of the high-tech camera. “It’s very untypical for a stone.”

Keller believes the landing rockets on the spacecraft might have melted frozen water on the Martian surface. That could mean the Phoenix landing site is a large sheet of ice covered by a thin layer of loose sand and rock. The scientists now want to take further colour photos to confirm their theory.

The US space agency NASA successfully landed Phoenix on the arctic plains of Mars at the end of May following a 680 kilometre journey from Earth. The probe will search for signs of life on the red planet for the next three months.