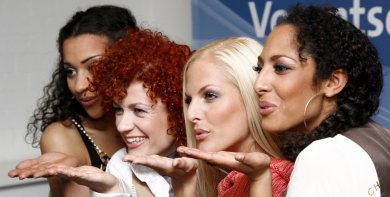 Dieter Bohlen, the German equivalent to American and Pop Idol’s snarky Simon Cowell, spoke out against the last-place flop in the 2008 Eurovision Grand Prix competition.

“Every other participant sang better,” the 54-year-old told German daily Bild on Tuesday, adding that he was “shocked” that the singers from the country’s band No Angels sang off-key during parts of their song “Disappear,” on Saturday evening. “Unfortunately one has to say that the ranking was correct.”

Click here to view photos of the No Angels.

The No Angels girl band tanked in the final round of the competition, taking last place, along with Poland and Great Britain, out of the 25 countries that participated.

He also said the Eurovision judging system should be revised. “Tiny countries like Andorra and San Marino shouldn’t have the same voice as countries like Germany and Russia,” he said.

Meanwhile the head of NDR, the German TV station responsible for the the country’s portion of the Eurovision Song Contest, also criticized the band on Tuesday.

“You either need a ballad with great feeling or a lively up-tempo number with a good stage show,” Ralf Quibeldey told Hannover Daily Neue Presse. “‘Disappear’ didn’t fulfill either of these.”

“The problem is that established German artists don’t have the confidence to compete in the contest,” Quibeldey told the paper, saying that the national section of the contest is particularly frightening to German musicians because their managers and labels often disapprove or meddle in song choices. “We need to introduce the public to our top line-up,” he said. “But we won’t change the national round.”