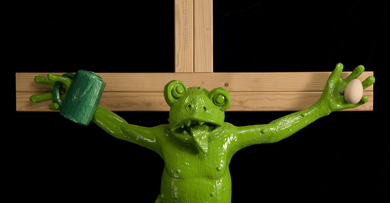 “We’ve decided that a leaflet about this work will be distributed to all visitors to explain its artistic value,” a spokesman at the museum in northeastern Balzano told AFP on Monday.

The work by the late German artist Martin Kippenberger, about one metre (three feet) high, shows a bright green frog on a cross gripping a mug of beer on one side and an egg on the other.

Curators say the sculpture is a self-portrait of the artist “in a profound state of crisis,” according to the ANSA news agency.

“Although it is not our policy to pass judgement on works of art, the sculpture could be perceived as a provocation by the people of the Alto Adige region, which is 99 percent Catholic,” regional governor Luis Durnwalder told ANSA.

Balzano Bishop Wilhelm Egger also criticized the work, which went on display at the museum on Saturday, ANSA said.

Kippenberger, who died in 1997 aged 44, was a painter, sculptor and photographer.

Several exhibitions of his work have been held posthumously including a show at the Tate Modern in London in 2006.