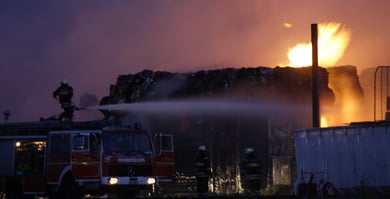 The blaze covered 3,000 square metres of a large outside area in the Kreuzberg district. No one was injured, but firefighters were expected to combat the remnants of the fire into midday Thursday.

The fire started around 8 pm in a warehouse district just south of the Spree River as balls of compressed recycled paper rapidly went up in flames, sending a huge plume of black smoke into the sky behind Berlin’s iconic television tower.

The fire set alight a neighbouring 200-square-metre workshop, which burned to the ground before fire department could get the fire under control. More than 130 firemen with 14 trucks from across the city fought the blaze, which raged for several hours and continued to smoulder on Thursday morning.

Firefighters had to draw water straight from the Spree when the inferno was strongest.

No one was injured in the fire, and city officials said there was no danger posed by the smoke and ash from the paper, which was stored at an outside facility.

The fire department set up special barriers to protect the Spree from environmental damage from the foam used to extinguish the blaze.

The cause of the fire is as yet unknown.