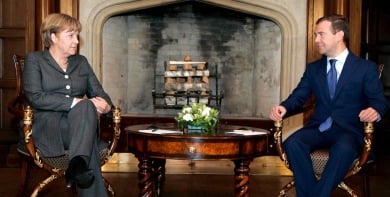 “I wish the new president Dmitry Medvedev all the best and good luck. I am looking forward to cooperating” with him, Merkel said in an interview with regional daily Passauer Neue Presse.

Medvedev was inaugurated as Russian president on Wednesday. Shortly after taking office, he named his former mentor and predecessor Putin as prime minister.

Merkel added that she expected to continue to work together with Putin, who on Thursday was expected to be confirmed as prime minister.

“We will also cooperate in his new role as prime minister,” Merkel said, adding she had a “very constructive and direct relationship” with him.

Although the two had not seen eye to eye on all issues, they had “always had open, honest and exciting discussions,” she said.

“I valued our cooperation. We are both aware of the great importance of our strategic partnership,” Merkel said.

Medvedev is expected to visit Berlin for the first time as president in June.