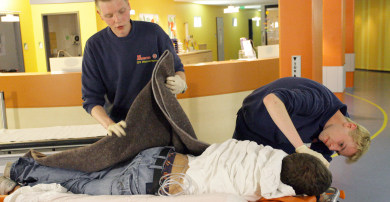 The number of hospital visits due to alcohol overconsumption among Germans aged 10 to 20 has also more than doubled since 2000, according to the report. Some 19,500 German youth in that age group were hospitalized after drinking – including 663 in Berlin alone between April and December last year.

“We cannot underestimate the influence of alcohol advertising that often targets youth culture and images,” German Drug Commissioner Sabine Bätzing said, criticizing companies for not showing the negative effects of drinking to excess.

The German government is preparing a national program on alcohol prevention that will target youth and try to determine why young Germans drink, Bätzing said.

Teens are legally allowed to drink beer and wine in Germany at 16 years old, though hard alcohol is prohibited until teens turn 18 years old.

Last year 1,394 deaths in Germany were attributed to drugs, an increase of 98 deaths over the previous year in what Bätzing called a “surprising reversal.” The number of drug-related deaths had declined in Germany each year since 2001.

Bätzing already alerted the country to higher rates of alcohol abuse among minors in a separate Europe-wide study released in March. That study found hard alcohol consumption among 9th and 10th graders in Germany had risen from 53 to 57 percent between 2003 and 2007. Beer consumption rose to 67 percent of children in that age group last year.

The March survey, the European School Survey Project on Alcohol and Other Drugs, also reported that 21 percent of survey respondents said they had been in a fight after drinking.