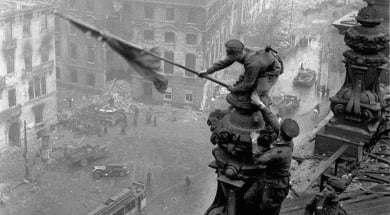 As an exhibition is being prepared for opening in Berlin at the Martin Gropius Bau on May 9, new details have been released about the picture, according to weekly news magazine Der Spiegel.

Photographer Yevgeny Khaldei took the photo shortly after the Red Army marched into central Berlin and flew the negatives to Moscow.

It was only when he started to develop them that he realized that one of the three Soviet soldiers on the roof was wearing two watches, one on each wrist – a clear sign of looting which did not fit with the heroic image of the army.

He scratched the second watch from the negative and it was printed as week later in an illustrated magazine.

Later, in alternations already known, Khaldei added more clouds of smoke in the background and even substituted the original flag with a large one filled with wind.

Khaldei died in 1997, venerated as one of the most important Soviet war photographers, described as the Robert Capa of Russia.