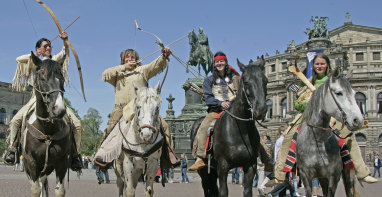 On target in Saxony. Photo:DPA

More than 1,500 hobby Native Americans, cowboys, trappers and settlers, have turned the town of Hundsdorf near Koblenz into Dog City.

The Indian Council, which started last week and lasts until May 12, brings hobby wild westerners from across the continent together to recreate cowboy and Indian life.

The Indians live in tipi tents, while the ‘townspeople’ have built a Western-style clapboard street, with a saloon complete with honky-tonk piano and bad whiskey.

Further down the street is the sheriff’s office complete with a jailhouse.

The German Western Association, (DWB), which organizes the meeting, has been doing so since 1951, when 120 enthusiasts met in Nuremberg and founded the group.

Since then it has been an annual event, taking professors, engineers, computer programmers and all manner of other Germans out of their everyday lives and into an imaginary Wild West.

“The authenticity is important to us – that the tents of the Indians, as well as the trappers’ camp and the western town – are as close to the lifestyle of the west at that time as possible,” said DWB chairman, Larry Eichel.

The theme was reproduced across the country in Radebeul near Dresden, with the Karl May weekend, dedicated to the German Western novelist.

Many Native Americans were guests in Saxony, helping to organize bow and arrow shooting competitions.

Again, a camp and a small western town have been built, and children were offered the chance to pan for gold in a river.