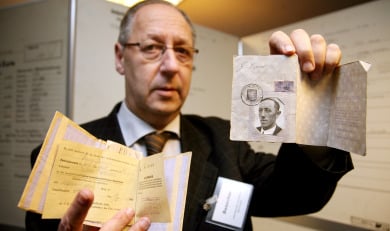 The decision was made to open the Bad Arolsen archive to historians nearly two years ago, granting access to a uniquely detailed and historically valuable collection of documents.

There are also many personal identity cards and even possessions in the archive.

The International Tracing Service archive contains the details and fates of around 17.5 million civilians, from records collected by humanitarian organizations such as the International Red Cross immediately after the war.

They include records of lice inspections from concentration camps, reports on the reasons why many prisoners were being held in camps, and even insurance policies that German firms were required to take out when the used forced labour from those camps.

Reto Meister, Tracing Service director told journalists: “This is an opening in the more profound sense of the word. Before this we gave out information like a bureaucratic authority, but in the future we will operate more personally with those posing the questions.”

More than 300 people work in the archive, situated in a small Hessian town.

The German government had been put under pressure from a number of countries over decades for its insistence on keeping the archive closed, citing privacy rules.

Two years ago justice minister Brigitte Zypries announced a change of heart and said not only would the archive be opened, but the records will be copied and given to the 11 countries which have acted together to preserve it.