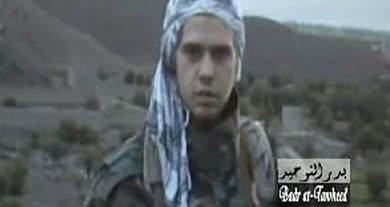 Eric B. declares jihad in the internet video. Photo: DPA

The paper announced the news in advance of its Wednesday edition, reporting that the film sequence shows 20-year-old convert to Islam, Eric B., declaring his plan to carry out a suicide bombing for his faith.

Bild also reported that security experts have taken the farewell video seriously and haven’t ruled out a possible attack in Germany.

The family of Eric B. is receiving psychological treatment, the paper continued.

In early February, Germany’s federal police agency (BKA) announced that Eric B. and Houssain al-M., both from Neunkirchen in the German state of Saarland, had travelled to Afghanistan at the end of 2007, where they are thought to have prepared for a suicide bombing there.

Both are suspected of having ties to suspected terrorists arrested in the Sauerland region in the German state of North Rhine-Westpahlia last autumn that belonged to a group known as the Islamic Jihad Union.

According to information obtained by DDP, one of these suspects, Adem Y., was closely acquainted with the German Turk Cüneyt Ciftci from the Bavarian town Freising. Ciftci blew himself up along with two US soldiers and two civilians in a suicide attack on March 3 at a US base in eastern Afghanistan.