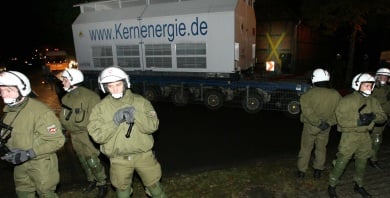 Police escort a castor of nuclear waste in 2006. Photo: DPA

Citing anonymous government sources, the newspaper said the transport planned for 2009 would not happen because of a delay in gaining approval for a new type of radioactive waste transport container, called a castor.

The 2009 transport was to be the second to last time highly radioactive waste originating in Germany is shipped from reprocessing in France to the Gorleben facility, in the German state of Lower Saxony. But now another transport will be necessary in 2011, according to the Süddeutsche.

Approval for the new transport container was originally expected in summer, according to the newspaper’s report, but the review is now expected to last until September. The container’s manufacturer is the Association for Nuclear Service (GNS), a joint subsidiary of the German atomic power companies Eon, RWE, Vattenfall and EnBW.

The German Institute for Materials Research wrote GNS in December to complain about ‘deficits’ in the way basic problems in the application for review of the new container had been addressed, according to the Süddeutsche. The newspaper reported that some testing models had been altered to obtain certain results.

Critics of nuclear power in Germany have argued in the past that testing is insufficient to ensure the safety of the transports, the newspaper said. Although the nuclear waste in the transports originates in Germany, sending it back from treatment in France via rail has been unpopular, with activists in some cases chaining themselves to the rails to halt the transport train.

Seventy-five transport containers have been shipped from La Hague to Gorleben in the past seven years, according to the newspaper report. Enough material to fill 33 more containers awaits shipping in France. A shipment is expected this fall using a French model of transport container.