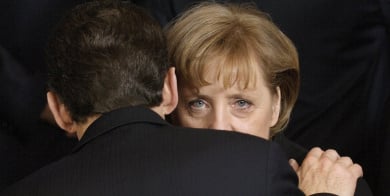 Merkel and Sarkozy confer in Brussels in March. Photo: DPA

Germany and France are ready to restart their twin-engine EU motor as Paris prepares to assume the bloc’s presidency.

Several working groups from the two European powers have been set up to harmonize positions on key dossiers during France’s six-month turn at the EU helm which begins July 1, according to diplomats from both nations.

“France is preparing for its EU presidency with an intense dialogue,” with Germany, French Foreign Minister Bernard Kouchner said in Berlin last week.

One of the priorities for the European Union is cutting greenhouse gas emissions, and France and Germany have promised to work to implement an agreement between all 27 EU member states by the end of the year.

One issue which will need to be resolved is Berlin’s complaint that the planned rules on car emissions favour the smaller French-made vehicles over the larger gas-guzzling German brands.

In the farm sector, agriculture ministers from both nations oppose British attempts to slash the EU’s massive farm subsidies system – which eats up 40 percent of EU spending and of which France is the biggest benefactor.

There are also talks on European security, though Germany is awaiting detailed proposals from President Sarkozy.

The French leader has proposed fully reintegrating into NATO’s military command, which his country left in 1966, on condition that Europe’s defensive capabilities are boosted.

Kouchner’s declaration of French willingness to work together was in part a response to German media concerns over some of France’s other ideas for European policies.

Berlin is a staunch defender of the European Central Bank, while France complains that its role in keeping down inflation is threatening exports by keeping the euro artificially high.

Also the way Sarkozy recently launched a Mediterranean Union project was greeted with dismay by Chancellor Merkel, as the idea was to reinforce cooperation between southern Mediterranean nations and their EU counterparts on the coast, thereby excluding Germany.

Sarkozy modified the scheme to include all EU nations.

The EU 27 approved a vastly watered-down scheme last month, though details will be hammered out ahead of the first EU summit with France at the helm, scheduled to take place in Paris on July 13.

“I think things will sort themselves out from here on,” a senior German official said, stressing that Berlin and Paris had agreed “to prepare together” for the French EU presidency, which will also be key in ushering the bloc’s wide-ranging Lisbon reform treaty.

The official added that the efforts to launch the EU’s traditional French-German engine was not aimed at the other member states.

“There’s no doubt, people with good sense in Paris … say that you can’t not work” with the Germans, one said.

“When the French and the Germans talk on European issues and European interests, it’s always good for Europe,” a leading official at the European Commission said, adding that since the Mitterrand-Kohl era of the 1990s there “has been little in terms of leadership” from the duo.