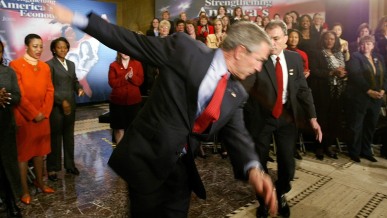 The Goethe Institute, protector and promoter of the German language, announced the most beautiful ‘words with migration background’ on Friday evening, and crowned Tollpatsch ahead of Currywurst and Engel.

The success of those words can be measured by their wide use and acceptance – and the fact that many German-speakers would not necessarily know that they had foreign roots.

But Currywurst is a mixture of German wurst and Tamil curry, while Engel, angel, comes from Greek. And Tollpatsch is Hungarian, stemming from a 17th century nickname for foot soldier.

Her reasoning read, “This word has travelled many kilometres and overcome borders… it walked its shoe-leather off on the long way from Hungary to Germany… we laugh over the newcomers, but integrate the migrants so fast and successfully, that we have completely forgotten its migration background. Talpas is what one called Hungarian foot soldiers in the 17th century. The nickname meant clumsily-footed or awkward as in Hungarian Talp means sole or foot.”

It was also pointed out that the similarity of Tollpatsch to toll meaning crazy and Tölpel meaning boob or clown, undoubtedly helped integrate the migrant word.