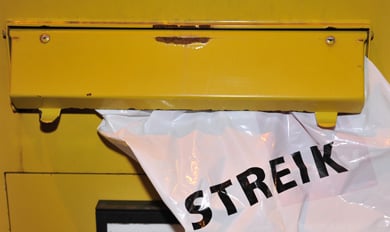 Workers walked off the job at 10 pm on Sunday in Duisburg, Wiesbaden and Hamburg, according to Verdi.

“Employees and customers can expect a healthy company that has increased its forecasted profit margins not to be at their expense,” said regional postal official Wolfgang Abel.

Verdi warned in a statement mail service would be hit in several German states this week: “The responsibility that thousands of customers in the western Ruhr Valley and Lower Rhine regions didn’t receive any mail on Monday lies with managing board of the Post.”

At least 100,000 letters will not be delivered to eastern Hesse alone and no mail will be sent in Hamburg and the northern state Schleswig-Holstein.

Marathon wage talks failed to reach an agreement early Saturday morning in Düsseldorf, but Post officials have signalled they are prepared to improve their offer. Personnel manager Walter Scheurle told daily paper Süddeutsche Zeitung that it “wasn’t the final word from the Post.”

And Deutsche Post spokesman Manfred Harnischfeger said the company now expected Verdi to return to the bargaining table with a counteroffer. “We have to seek out dialogue in order to get the talks moving again and avoid a massive strike,” Harnischfeger told German news agency DPA.

Should there be no breakthrough before May 2, the union is threatening to start an unlimited strike.