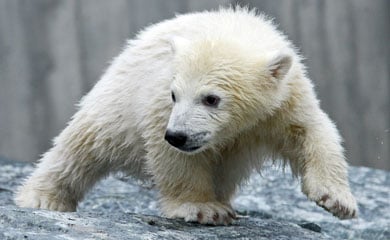 More than 10,000 polar bear fanatics have gathered at the Wilhelma Zoo bubbling with anticipation in the hope of catching a glimpse of the cub.

Wilbär made his public debut under the watchful guard of doting mother Corrina, and the crowd was keen to witness the developing bond between the two bears, as they play and splash about in their enclosure.

The zoo in the southern German state of Baden-Württemberg has kept Wilbär inside since his birth last December. The fur-ball cub measures just under one metre in length.